You are here: Accueil › The Liege Port Authority › A bit of history

A bit of history

Liege, daughter of the river Meuse… 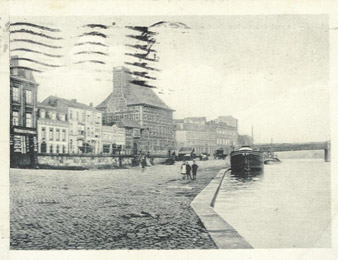 Since time immemorial, the river Meuse has served to underpin the birth, the development of the Liege Region.

The operation and management of the Liege port complex in its current form is a comparatively new development but the city has witnessed river traffic coming and going for thousands of years. As early as the 10th century, Liege was engaged in trading activities with the Netherlands, France, the United Kingdom and Germany. The century's most prized items arrived in Liege via the Meuse: wine from Alsace and France, spices from the Orient, luxurious carpets, Byzantine fabrics, while goods created by local activities travelled in the opposite direction: furs, stones, slate, grains, wool, sheeting, brass parts.

Liege has therefore long been a hub of shipping activities! The relationships forged thanks to the Meuse helped the river to exert a powerful attraction. These relationships made a huge contribution to the prosperity of the Principality of Liege, while making a major impact on the people living in the city. From the Huy hillsides to the Lower Meuse, via Liege, the river has enabled the Principality to provide opportunities for meetings and exchanges throughout the centuries.

Back in 1850, Liege did not have any port to speak of, nor a warehouse nor a handling site. Only a few shores were suitable for docking and goods transhipment activities. Numerous schemes have been carried out since then to change the flow of the River Meuse, but overall management of Liege port sites, docks and shores continued to be inconsistent.

The state created the Liege Port Authority in 1937, tasking this entity with the responsibility of overseeing the various state-owned ports.

The Albert Canal was inaugurated in 1939 during the international water exhibition, thereby boosting the Meuse river's navigation capacity from 600 tonnes to 2,000 tonnes so that Liege could serve not only Antwerp and the North Sea but also the city of Rotterdam.

The Liege Port Authority's port operating area was extended in 1969 to cover the industrial area in Liege: from Engis, upstream from Liege to as far as Visé, such that the operating area increased from 20 to over 40 km and the level of traffic reached 17.7 million tonnes.

In the light of the techniques developed and the requirements of the waterway users, the Autonomous Port has established several infrastructures in recent years, such as:

1984, working in cooperation with the Company Industrielle de Renory, the Liege Port Authority developed Renory port and created a trimodal platform including a container terminal. 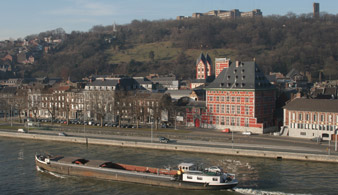 © City of Liege - Alain Boos
Now the third leading inland port in Europe, the Liege port complex boasts an annual level of traffic of over 18 million tonnes, a level that has been steadily rising for several years now. There have been development projects galore. The management of an outstanding 120 ha area along the Albert Canal in Hermalle-sous-Argenteau was recently entrusted to the Liege Port Authority. Called Liege Trilogiport, this multimodal platform-to-be will be focused entirely on logistics, while accommodating a 15 hectares container terminal. This platform is set to be become a fully-fledged "logistical village" in the centre of Europe in the near future.

The Liege Port Authority presently has 32 port areas spread along the river Meuse and the Albert Canal. This means a total 370 hectares of sites are available to users of the inland waterways.